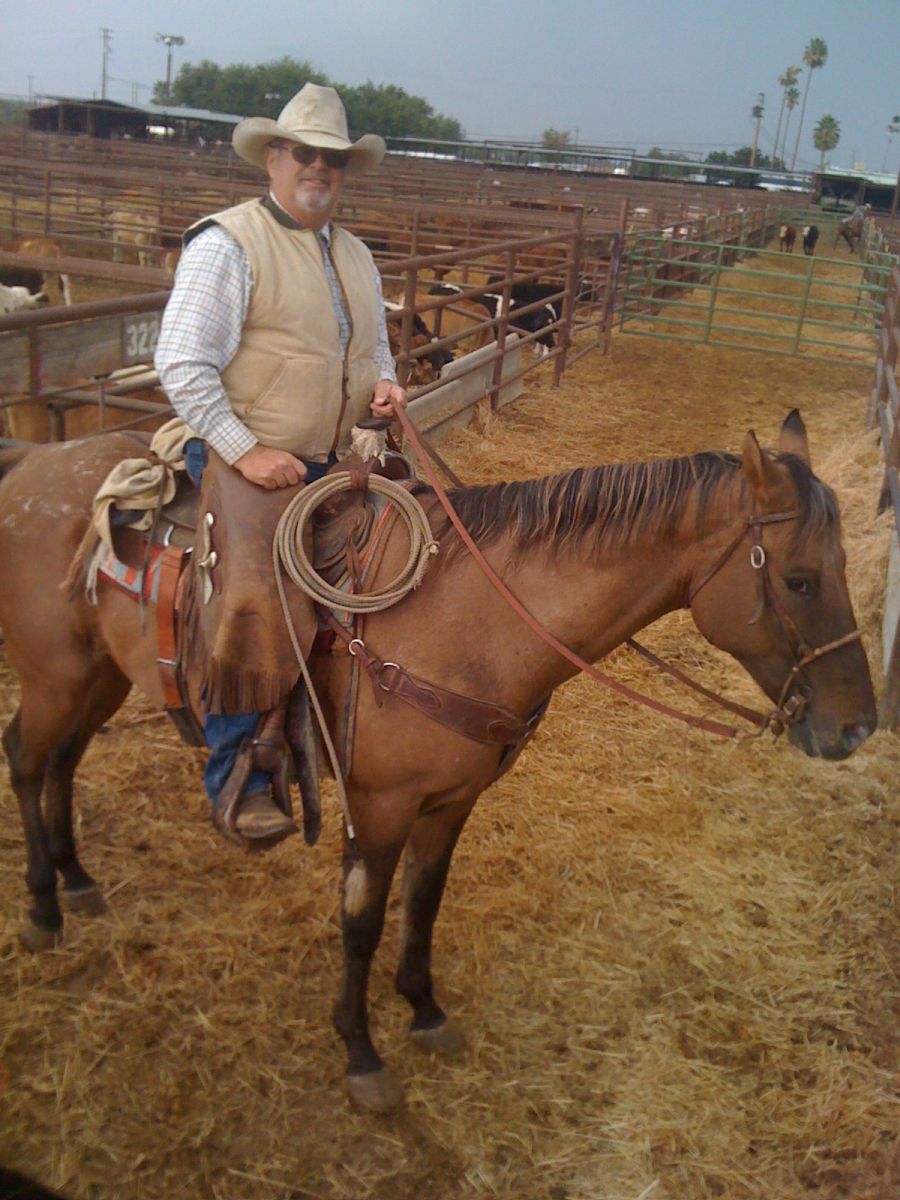 Jerry Hall is a Life Member of The International Western Music Association and Executive Vice President.  He is also a member of Jerry Hall and Trick Shot. He is a 34 year veteran of the California Highway Patrol and retired as a sergeant in 2003. He is also a veteran of the United States Army and served with the First Infantry Division in Vietnam in 1966 and 1967. Jerry was born and raised on The Gill Cattle Ranch in the foothills of The Sierra Nevada Mountains, near Springville, California.  He still day works on local ranches and cowboys at livestock sales yards.  He and his wife Joan, also run a few cattle of their own in the hills above Springville.  He is a certified Equine Chiropractor and served 12 years on The Springville Sierra Rodeo Board of Directors. 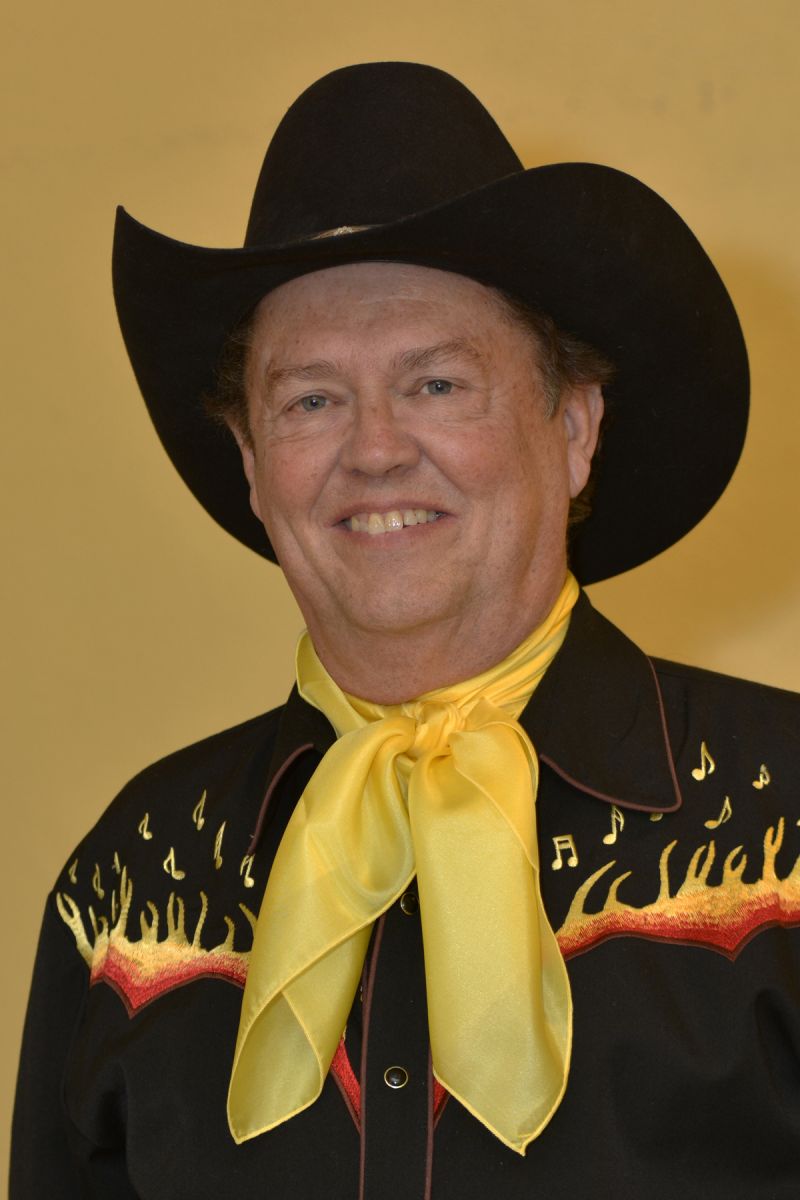 Marvin O’Dell is a life-long supporter and fan of western music. He has served on the Board of Directors of the IWMA for more than 10 years. He became President of the organization in January 2017 after having served as interim in that position since July 2016. In addition to his knowledge of the genre and strong belief in the preservation of the western heritage, culture, music and lore, Marvin brought over 35 years of nonprofit business management and leadership expertise to the Board. He has more than 20 years of prior board leadership experience. He is a longtime collector and student of western, classic country and bluegrass music and through the years also became a recognized radio personality in those arenas. Marvin’s strong communication skills, integrity, experience and vision for the organization are qualities that position him to lead the IWMA into the future. 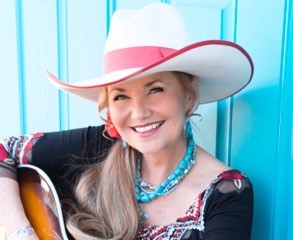 Belinda Gail was raised on ranches in Nevada’s Carson Valley and Sierra Nevada Mountains in the Central California. During High School she went to work in banking and spent 6 years as a teller and new accounts representative until she married and started having children.  After a few years as a ‘Stay-At-Home-Mom’ she went to work as a travel agent. She was ultimately promoted to regional manager and for the next 7 years managed 4 branches of a 12 branch travel agency. Belinda went on to own her own agency.  While working in the Travel Industry, and as her 3 children were growing up, she was a member of several service organizations and served on multiple committees. During this time Belinda also ‘moonlighted’ with a ‘casual’ band performing a variety of musical genres at private parties, as well as Hispanic, Portuguese, and Armenian celebrations.  As her youngest child was preparing to leave for college Belinda was approached by a management company to ‘take her music to a higher level’ with her own band, performing primarily Country Music.  She was with that company for almost two years before deciding to deciding follow her heart and switch to Western Music in 1995.  The management company did not support this decision so Belinda’s late husband Frederic stepped in as her manager and was her manager until his untimely death in 2008.   Besides enjoying a full rich career in Western Music, Belinda has remarried and is devoted to her husband Robert Lorbeer, 3 children and new step-daughter, and 10 grandchildren. 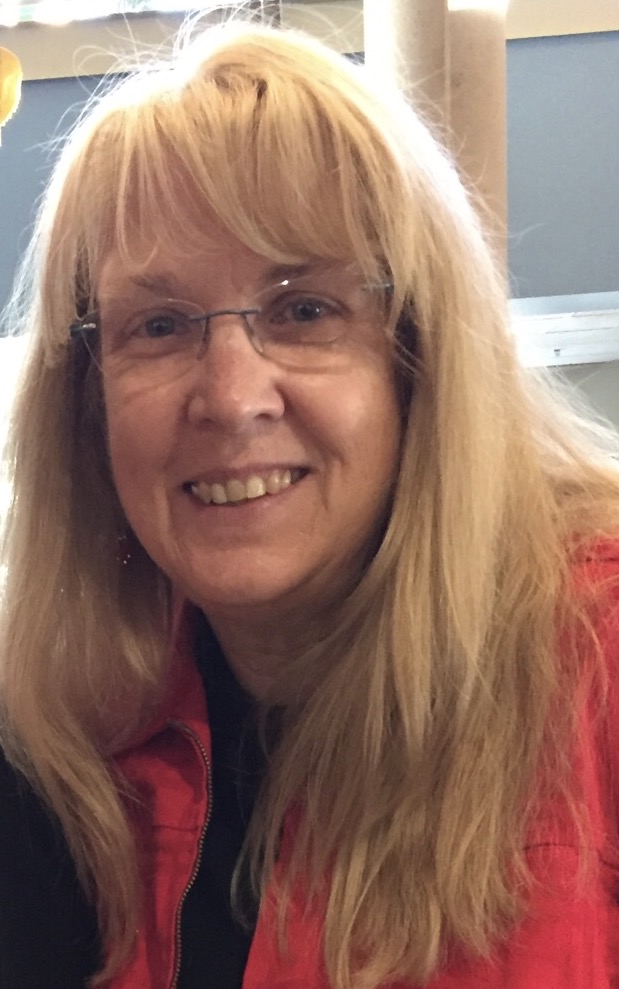 Diana Raven is a life time listener and supporter of western music and a life member of IWMA.  She was involved with the Colorado Cowboy Poetry Gathering for over 25 years, first serving as a volunteer and later as the co-coordinator.  Diana was instrumental in setting up the non-profit and serving on the CCPG board as the administrator. Diana worked as a Budget and Finance Analyst for Jefferson County Public Schools and retired after 31 years to pursue other interests.  She currently works with the Colorado Auctioneers as well as the International Western Music Association. 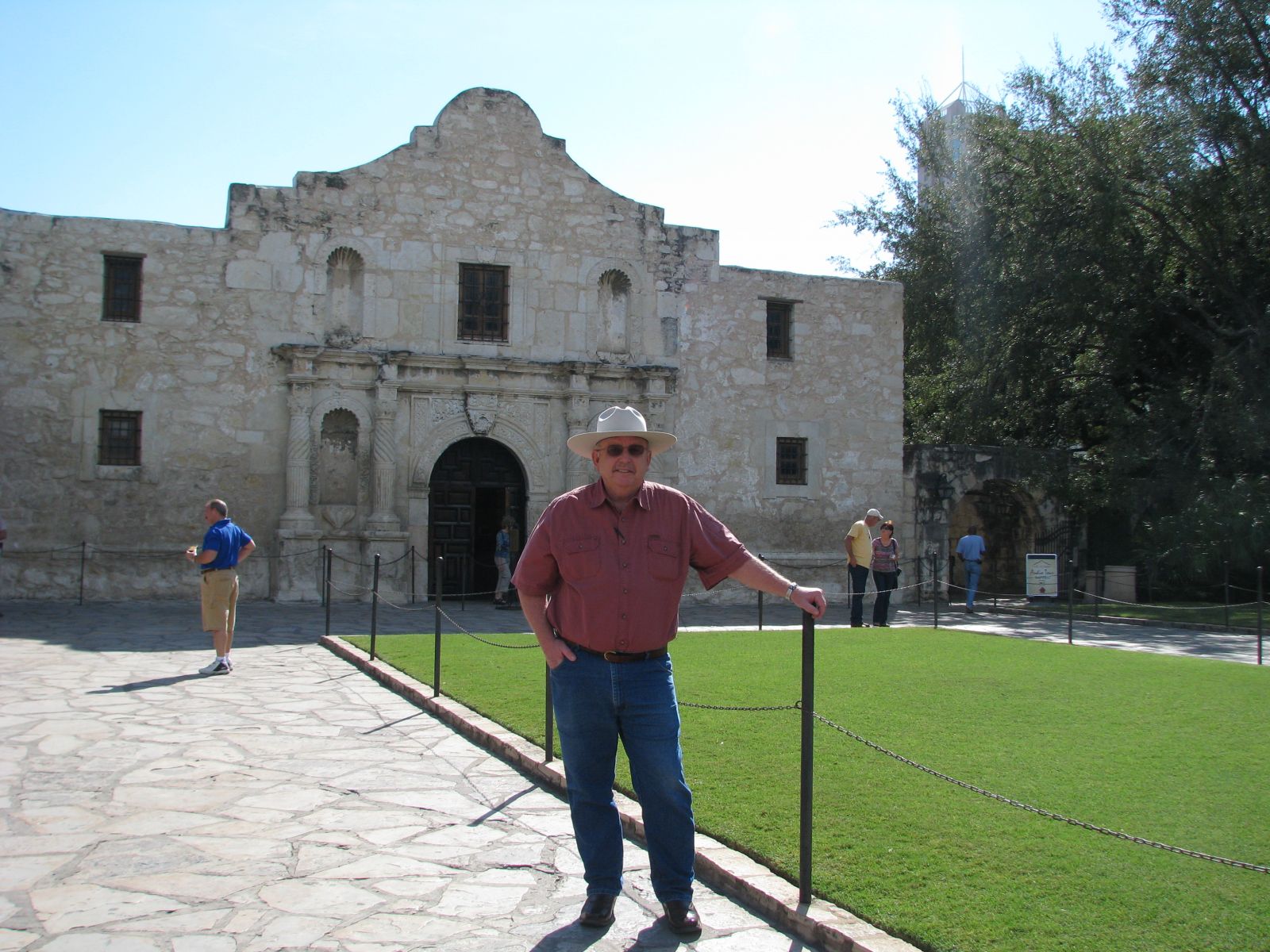 Richard is a native Californian raised in  Torrance and San Pedro, California.  Following graduation from San Pedro High School in 1967 he spent several years working in automobile dealership service departments. He attended L.A. Harbor College and Riverside City College.  Additionally, he received many hours of specialized in service training, including S.W.A.T and Homicide Investigations. In 1971 he began a 30 year career in law enforcement initially as a Reserve Police Officer for the city of Torrance.  In February 1974 he was hired by Riverside County Sheriff’s Department.  During his career he served in a variety of assignments in Patrol, Corrections, Investigations and various administrative assignments which gave him a background in scheduling, logistics, communication, and scheduling. Following his retirement, he and his wife, Esther, moved to Tombstone, Az. where they became involved in various community events.  He served as Vice President of the Tombstone Western Music Festival until it was shut down due to the loss of sponsor money with the economic downturn. Richard joined the IWMA Board of Directors as an intern for 2011 and was elected to the Board of Directors in 2012. 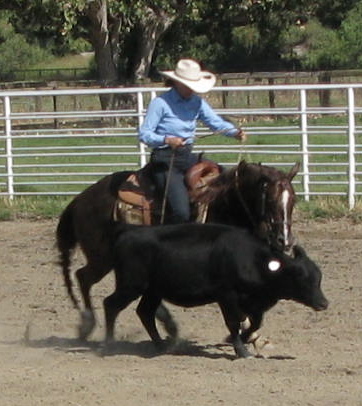 Juni Fisher has resided in Franklin TN since 1990, but was raised on a central California farm where she still bases on the west coast.  After a successful career training cow horse, cutting horses, 3 day eventers and steeplechasers was sidelined by injuries, she worked in radio, as a winery tasting room manager, and managed high end saddle shops, then landed a song publishing deal in Nashville, which led to her first album release in 1999. She’s an avid fly-fisherman, has competed in the ESPN Fly Fishing Masters competition, and is a qualified instructor for Casting For Recovery. Her mainstay passion is horses, and she’s returned to Cow Horses. Fisher and her 3 year old horse Reydio Airplay, a.k.a. DeeJay are preparing for the NRCHA Snaffle Bit Futurity in the fall 2017, with no plans to stop “flying equine fighter jets without a seat belt” anytime soon. 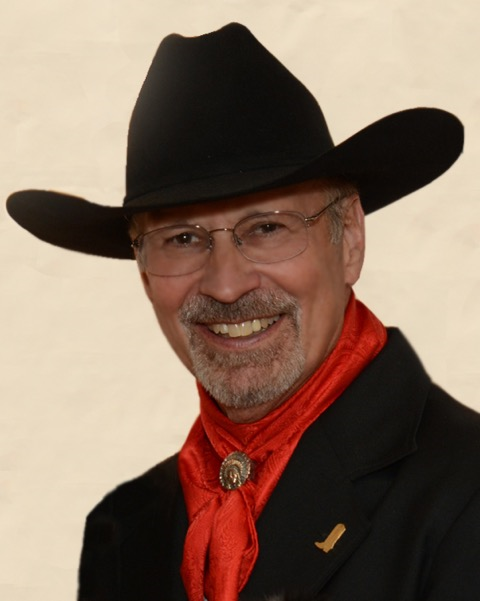 Bob is a Graduate of the US Military Academy, West Point, NY.  He was commissioned in the Infantry, and following airborne and Rangers schools, served in a variety of assignments, including the Berlin Brigade in Germany, the 101st Airborne Division in Viet Nam, Ranger School instructor and graduate school at Tulane University, followed by the Pentagon.  After 10 years of active duty, he resigned his regular Army commission and stayed in the Army Reserves.  He was recalled to active duty for Desert Shield/Storm and is a retired Army Colonel.  In 1979 he started a health care career, working in a variety of assignments including a large hospital, a post graduate Fellowship with the US Department of Health and Human Services, a private company providing health care on a contract with State and Federal agencies, and a private company providing technical services to hospitals, doctors and dentists. While employed in the health care field, he attended law school at night.  He had a general civil litigation practice in State and Federal Courts, representing clients in a variety of issues.He is an accomplished equestrian and for 11 years was the Captain and Drill Master of the Sacramento Sheriff’s Posse, a nationally known parade and drill team organization.  For 18 years, he rode in the Rose Parade with Long Beach Mounted Police, and was President of LBMP for 6 years.  He also judges horse shows and speak at clinics all across the US. 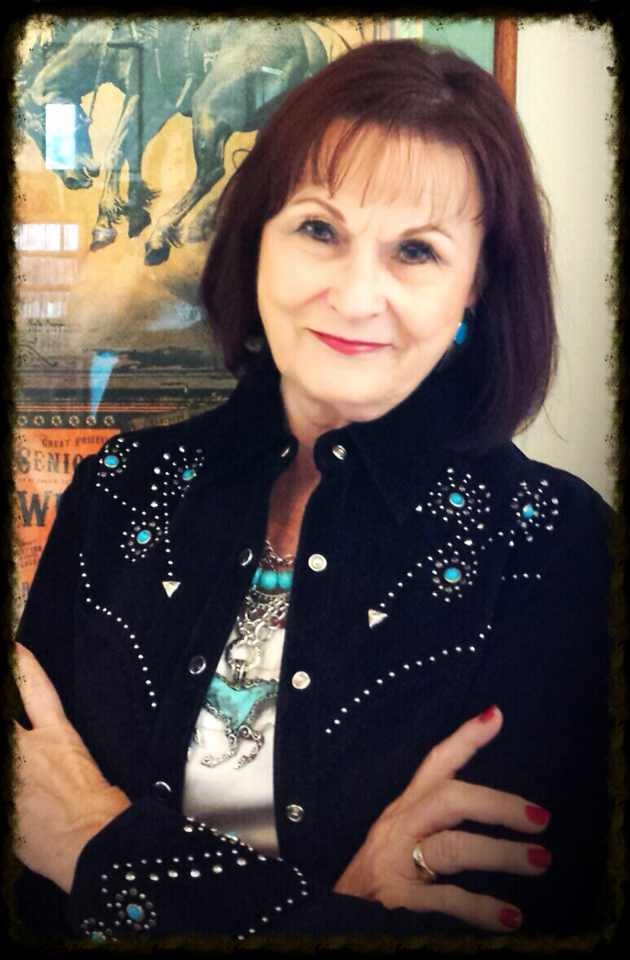 Theresa uses her expertise in education, publishing, business management and board experience to serve the IWMA.  In addition to more than 20 years in both high school and college textbook editorial development, publishing and marketing, she was instrumental in the establishment of two nonprofit businesses, both of which required the successful completion of the application process to secure 501(c)(3) status. She facilitated in the vetting process of potential board directors, provided support in the grant writing process and participated in strategic planning. She acted as a representative for each organization in the community while also managing the office and financial responsibilities. Due to her belief in the preservation of and ongoing education about the Western heritage, Theresa became the Managing Editor of the IWMA’s official magazine, The Western Way, in 2013, with a goal to expand exposure for the genre. Theresa’s broad range of experience in both the public and private sectors provides a valuable resource. 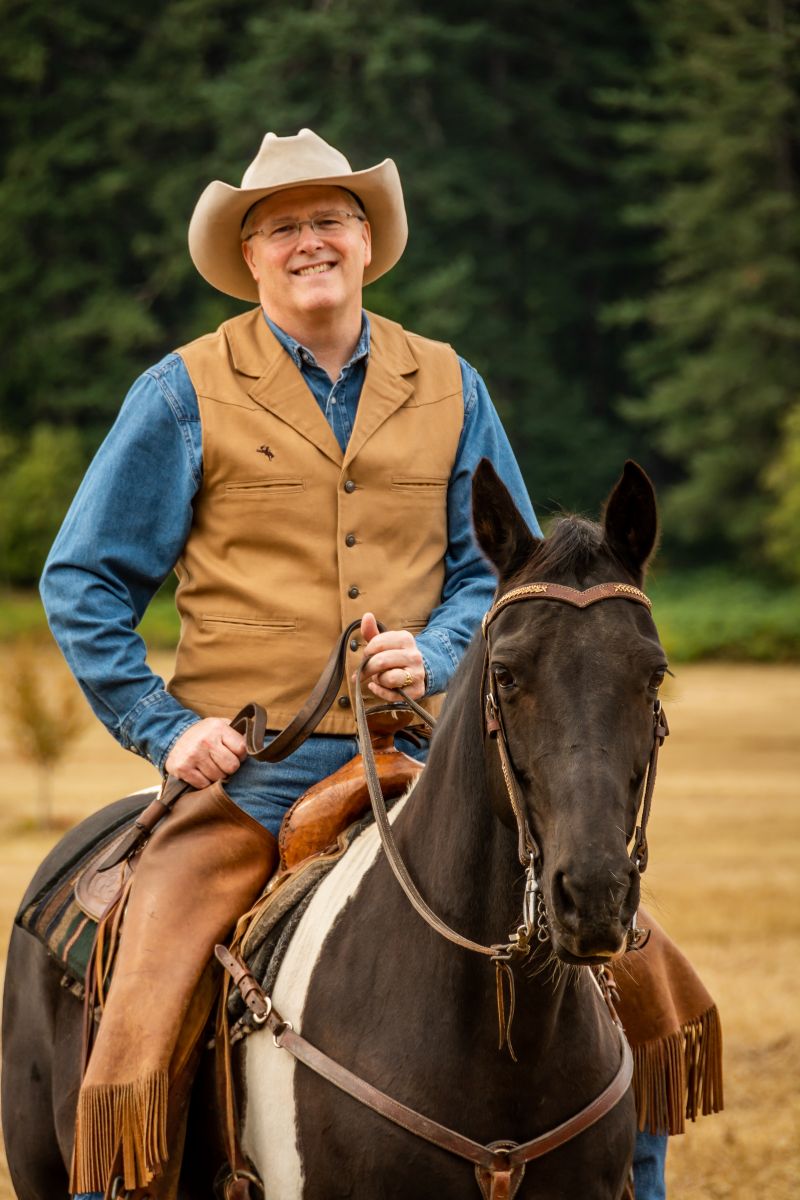 Tom Swearingen is a Portland, Oregon-area advertising agency owner, community volunteer, and horseman.  Tom is also known as an award-winning writer and performer of western and cowboy poetry.  He and his wife Carla are parents to two adult children who have started their own families in Portland.  Beginning his advertising career in 1975 after earning a Business Administration/Marketing degree from Portland State University he became President and Creative Director of Swearingen Advertising Agency in 1991. He is Past President of the Portland Association of Advertising Agencies, and Past Chair of the State of Oregon Professional Services Coordinating Council.  Tom has served the Cascade Pacific Council BSA in a number of volunteer capacities and is currently on the Chairman’s Advisory Cabinet.   He is a member of the Rotary Club of East Portland where he has served in a number of leadership roles including President and Foundation Director.  He also serves on the Oregon Department of Corrections Coffee Creek Correctional Facility Prison Advisory Committee.  In addition to his IWMA Board role, Tom serves as President of the IWMA Columbia Chapter, geographically representing British Columbia, Washington, Idaho, and Oregon.