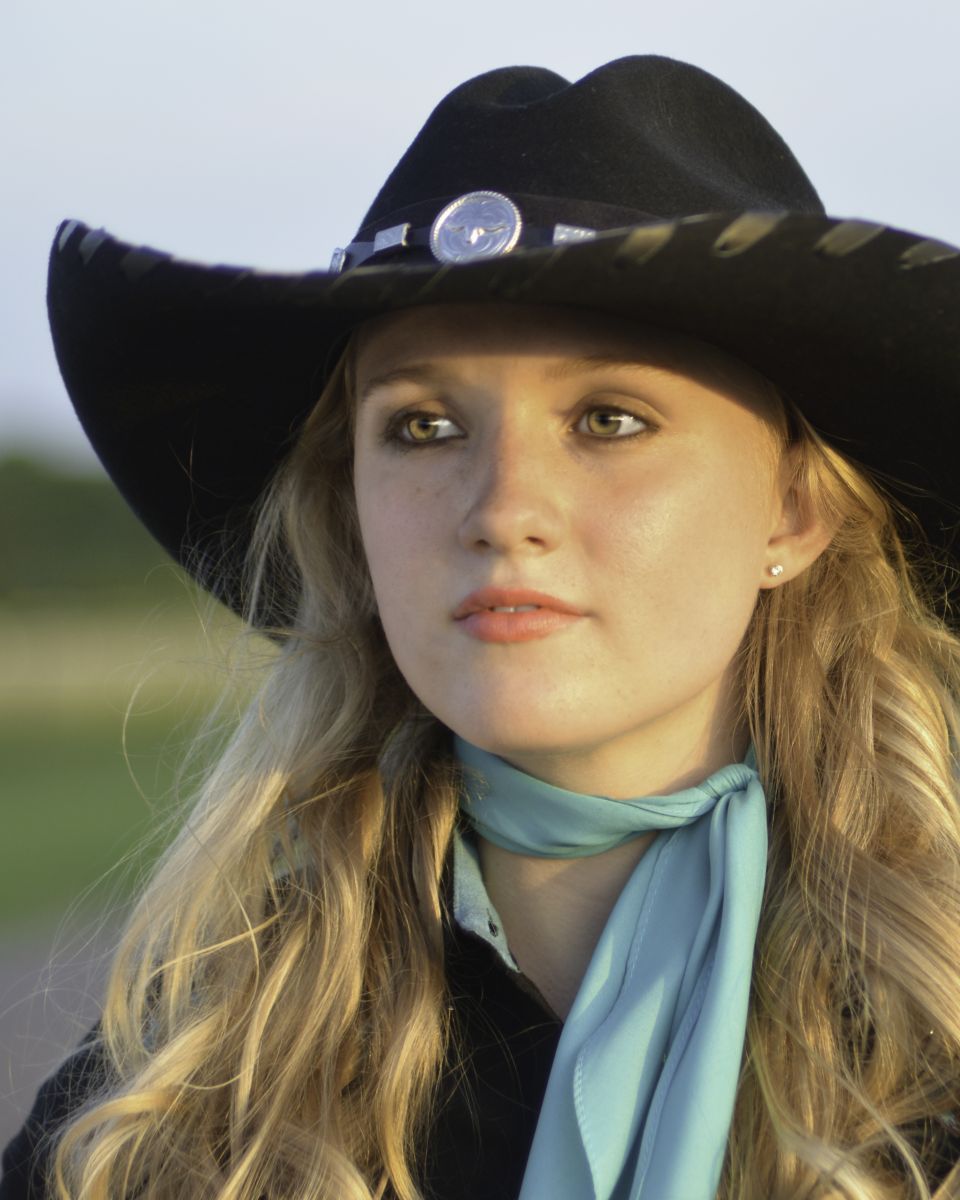 Mikki Daniel’s young resume includes singing, playing multiple instruments, songwriting, horse training and writing historical fiction novels. Living her whole life on a small ranch as a real cowgirl, she discovered her true calling of playing, writing and singing Western music when she, at 5, fell in love  with Roy Rogers and Gene Autry movies – she even owns (and trained) a golden palomino named Trigger. Mikki was mentored into the fascinating world of American cowboy-style music, yodeling and western swing (the official music of Texas!) first by those movie icons and then by contemporary music greats such as Dave Alexander, Joey McKenzie, Janet McBride, Devon Dawson, Bobby Flores, Rich O’Brien, Dick Gimble, and Mark Gheen. Known for her ability to spin a tale, strong rhythm guitar and crystal clear voice, Mikki began delighting audiences at festivals and events across the country with her unique style which now crosses genres from swing, western, western swing, big band, gospel, classic country and more. She has performed on national TV for RIDE TV’s “Unbridled Song” (featuring Mikki) and “Ride on the Road”; RFD-TV’s “The Penney Gilley Show” and “Horse Country Tours”; and has been proud to represent Western music at such events as the Professional Racing Industry Trade Show Convention in Indianapolis, IN. Mikki is most honored to count among her accomplishments the prestigious New Horizons Wrangler Award for her debut CD, "Gotta Be A Cowgirl" (which contains 9 songs that Mikki wrote); she made history by being the youngest person to ever win a Western Heritage Wrangler Award. Her second CD, “Cowgirl Swing,” has been awarded Western Swing Album of the Year by the Western Music Association and the Rural Roots Commission. She has been awarded the WMA 2016 Female Performer of the Year, the WMA Crescendo Award, the WMA Marilyn Tuttle "Best of the Best" Harmony Award, the WMA Janet McBride "Best of the Best" Yodeling Award, and received nominations from the WMA for Song of the Year for “She Could Ride” and Western Swing Album of the Year for “Gotta Be a Cowgirl.” She has also received the AWA Western Female of the Year and Yodeler of the Year Award as well as AWA nominations for Western Swing Female, Western Swing Album, Western Album and Western Song (for “Johnny Harness the Team”). Ameripolitan Awards also nominated her for Western Swing Female. She published her first historical fiction novel, Girls and Gunsmoke, in 2014, for which she also has received awards. She performs most often as a solo artist but also with her band, Texas Wildfire, (3, 4 or 5 piece) which she formed in 2014. You can't help but love the personality, charm and engaging performance of this dynamic, young entertainer!

”There are some unbelievable folks out there that are keeping this music alive; the main one is Mikki Daniel. She’s an extremely talented young lady with a lot of pizzazz and a tremendous  amount of  confidence  in what she is doing.” ~ Red Steagall

“Mikki Daniel has the ability to interpret her own tunes as well as those of others, her incredible songwriting is really authentic. She represents a great hope of the future of western music. At 17, I’d say that’s a pretty exciting statement!” ~ Michael Martin Murphey

“Mikki Daniel is the whole package, she is really fabulous!” ~ Jack Hannah, Sons of the San Joaquin