Miss Devon and the Outlaw 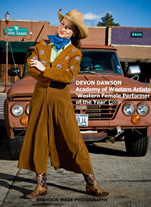 Devon Dawson, aka "Miss Devon" of Fort Worth, Texas, is top entertainer in western music, and has been recognized by the Academy of Western Artists "Female Performer of the Year 2009”.  Noted for her very rhythmic vintage 'sock-rhythm' guitar style,  and warm 'swingtime cowgirl' vocals which bring to mind Dale Evans, Rosalie Allen, and Patsy Montana, her lively onstage persona intrigues and engages both kids and the adults in her audience. She is a founding member of the long-time WMA favorite 'cowboy swing' group, THE TEXAS TRAILHANDS, and is the MUCH prettier half of MISS DEVON & THE OUTLAW, a duet she founded with 'Outlaw Jessie Del' Robertson in 2008. She holds a Grammy certificate for her participation in the Disney CD 'Woody's Roundup featuring Riders in the Sky', as the singing voice of Toy Story 2’s “Jessie, the Cowgirl”.   She has performed in and out of that character coast-to-coast, and all across the American West, including at the renowned Grand Old Opry in Nashville, Tennessee, and at Pixar Studios in Emeryville, California.  Currently, she can be heard on her well-received recording project, KEEPIN' YOUR HEAD ABOVE THE WATER' (2007), as well as all three of the WMA award-winning Texas Trailhands' CDs. Devon has appeared at rodeos 'n railroads, dances 'n dog shows, schools 'n saloons, cowboy gatherings, libraries, parties 'n festivals, with Radio Disney, Imagination Celebration, walk-ons with Riders In the Sky and Michael Martin Murphey, and has played rhythm guitar with the legendary "Texas Playboys".  This western-swingin' cowgirl, frequently spotted on Encore's 'The Westerns Channel' and RFD-TV, is cookin' up the most fun this side of the chuckwagon camp!