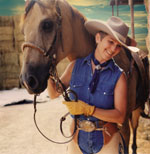 In 2003, Harms was named Female Vocalist of the Year and accepted the award for Song of the Year from the Western Music Association. She is also a multiple winner of Academy of Western Artists Awards, including the top honor of Entertainer of the Year for 2002, and she continues building audiences through appearances on the famed Grand Ole Opry and a recent stint at New York City's Carnegie Hall. She became a member of the IWMA Hall of Fame in 2020.