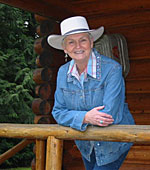 Mag is an award-winning, western roots poet who was named the 2012 Cowgirl Poet of the Year for the Will Rogers Awards, sponsored by the Academy of Western Artists.  More recently, she was nominated TOP FIVE for 2014 and 2015 Western Music Association Female Poet of the Year. She has been a featured performer at evey major cowboy festival and other events in Western Canada and into the U.S. Her recitations have also been aired on TV and radio. Her passion for writing extends to freelancing and she's been published internationally in numerous magazines, anthologies, newspapers and websites. In recent years, Mag has turned her hand to songwriting and her fourth poetry book, "Western Spirit," won the 2013 Cowboy Poetry Book of the Year from the Western Music Association. It contains poems, songs, photos and a 13-track music CD in which eight musicians from Canada and the U.S. sing the melodies they've composed for her lyrics. In March 2019, at the Kamloops Cowboy Festival, Mag was presented with the prestigious Joe Marten Memorial Award for the Preservation of Cowboy Heritage in B.C. Mag resides on Vancouver Island.