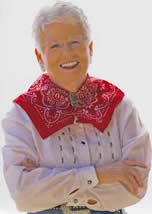 Janet McBride has been singing as long as she can remember. Janet has released seven CDs and a number of cassettes since she resumed recording in 1981. Her latest CD was released in January 2005. The album features Janet singing an original song, "A Cowgirl's Dream," which includes a clip of Patsy Montana's singing and yodeling that was taken from an undated demo tape found in Montana's house after her death. And what yodeler hasn't dreamed of singing with Patsy Montana? In 2007, Bronco Buster Records in Germany released a CD "Honky Tonk Ballads & Classic yodeling" which contained 28 cuts from recordings released from 1960 thru 1968 and in 2009, Janet released her highly acclaimed CD #008 "Still Loving the Ride" which contained two unreleased master cuts from her first recording session in 1959. It was of Wynn Stewart and his band which included at that time Ralph Mooney. Ralph had totally forgotten that there were two more songs out there and they were immediately added to the vast catalog of this great musician. Janet's life story was released in 2011 (Still Lovin' the Ride). It contains many photos from her birth in the 1930s thru and including everything up past the death of her husband and stage partner Billy (John) Ingram on December 20, 2010.