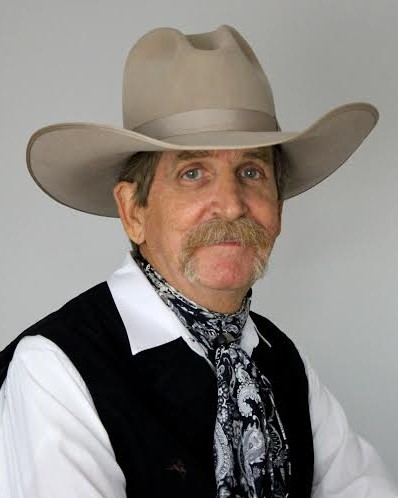 Donnie Poindexter can trace his connection with cattle, horses, land and community back five generations.  His great-great-grandfather on his mother’s side ran open range cattle on the Bluestem and Indian grass in what was then Indian Territory.  His Confederate States of America tombstone still stands in the family cemetery.  Donnie’s great-grandfather and grandfather also ran open range cattle and held farming operations in this wild rugged territory.  After becoming the state of Oklahoma in 1907 and closing of the range the cattle operations became much smaller but more numerous.  Donnie’s father ran a small herd on the home place and his older brother still runs cattle there today.  In fact, Donnie and all four of his brothers have ran cattle and all of them still own horses.

Donnie’s early memories include waking up hearing his father playing his guitar and singing while waiting for the old wood stove to warm up.  One of his favorites was Smiley Burnett’s “Riding Down The Canyon”.  That early exposure to music was a big influence on Donnie and his two oldest brothers who still play music today.  The three of them still make local appearances as “Steeldust”.

Donnie played Classic Country and Bluegrass for many years before falling in love with “Cowboy Music”.  His music is heavily influenced by Marty Robbins, Don Edwards, Tom Russell, Ian Tyson, R.W. Hampton, George Strait, Merle Haggard and others.  Donnie has written some of the songs that he performs and is working on more to add to his list.  He has just completed his second solo album titled "Those Cowboys of Old".  The first album, "Cowboy Life", was on the Western Way Magazine's top 30 list for 18 months. The album was a top five nomination for Western Album of the Year in the Academy of Western Artists and the title cut, "Cowboy Life", won the Working Cowboy Song of the Year in the International Western Music Association. Donnie also received a top five nomination for Songwriter of the Year in the Pro Cowboy Country Artist Association.