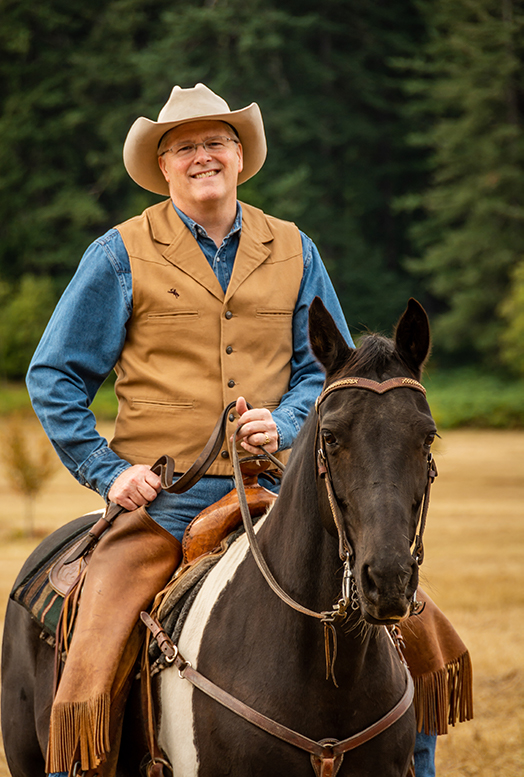 Oregon horseman Tom Swearingen is an award-winning cowboy poet who tells stories of the people and land of the American West through original poetry that is often inspired by his own experiences and observations from the saddle.  With ranching and farming on both sides of his family tree, Tom’s love of the cultural tradition and art form of western and cowboy poetry began at an early age.  Writing and performing poetry himself comes from a desire to continue the tradition, and his western lifestyle provides much inspiration.  Tom brings his stories to life with rhythm and rhyme and a style that makes him a popular performer not only at cowboy gatherings and horse camps, but at libraries, historical centers, private functions, and wherever else you find folks who appreciate the cultural heritage of the West.  Swearingen is a two-time winner of the National Finals Rodeo Cowboy Poetry Contest and 2022 and 2019 International Western Music Association Male Poet of the Year.  He has also been nominated for Male Poet of the Year by the Academy of Western Artists. Nearly thirty of Swearingen’s poems have been published in contemporary cowboy poetry anthologies and publications. His own book “Reflection” was named IWMA 2020 Cowboy Poetry Book of the Year.  He has recorded three live concert CDs, each a finalist for IWMA Cowboy Poetry CD of the Year.  His 2019 album “Language of the Land” reached #1 on Western Radio. Tom has been a headline and featured performer at major western music and cowboy poetry festivals throughout the West including Cochise, Monterey, Kamloops, Durango, Cimarron, Columbia River, Spirit of The West, Arizona, and the National Cowboy Poetry Gathering in Elko, NV. For more on Tom see oregoncowboypoet.com.

From "Rick Huff's Best of the West Reviews" column in The Western Way from the Western Music Association:

Tom Swearingen’s Horses and Happiness is one of the best cowboy poetry albums I’ve had the pleasure to hear. I love the humor. I love the introspection. I love the timing of the delivery and the construction of the verses. I really love the imagery and the pictures painted. And I further love that the album was professionally recorded “live” at a house concert, which puts just that much more of a spark into the performance and the listening experience with the appreciative crowd reaction. They knew they were in on something good!

The verse of Tom Swearingen is characteristically brief, always to the point, effective and (most often) optimistic. And once again he has chosen to record his Rhyme ‘Em Cowboy! CD in front of appreciative living beings, which I generally find to be a plus. Whether he is operating in the realm of novelty (“Teddy Franke is One Tough Hand”) or he is leaning more toward the thought-provoking (“The Visit”; "One to Ride The River With"; or “Dogies in Our Band”); Swearingen spins a fine tale and his expert delivery is comfortably conversational in its cadence.  Swearingen is most certainly one of the poets folks might want to point out when they are trying to explain or typify the genre of cowboy poetry. His style and body of work make him one of the most approachable cowbards workin’.