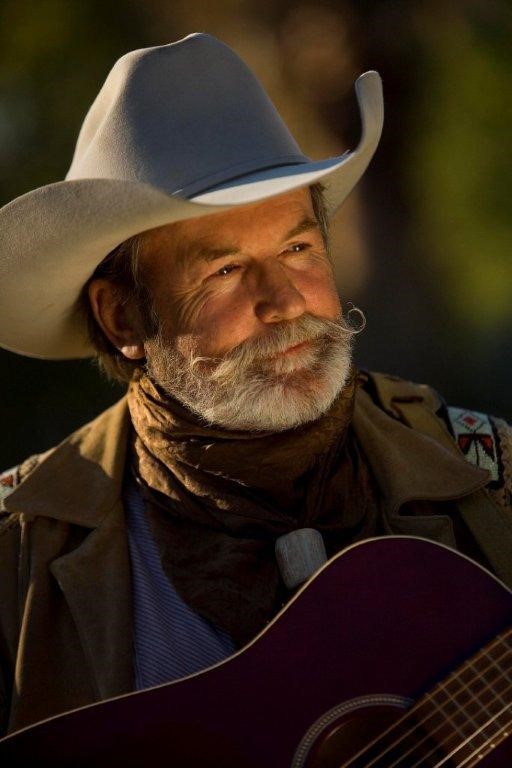 K.R. Wood's interest in country music began over forty years ago.  K.R., a native Texas singer, songwriter, historian and musician, plays 6 and 12 string acoustical guitars and has received acclaim for his Fathers of Texas CD series.  It is a collection of songs and narration about Texas’ storied history, which is considered a landmark in Texas music. His CD titled “Davy Crockett’s Fiddle Plays On” was recorded live in the Alamo with the Davy Crockett Fiddle from the Witte Museum. This is an honor and privilege that only K.R. Wood has been given.

On November 11th, 2017, KR was the Recipient of the Western Music Association’s President’s Award for “Keeping our Western Heritage alive through music” with his newest CD “Songs & Tales of the Old Chisholm Trail”.  And on April 14th, 2018 KR received the Wrangler Award for “Best Western Original Composition” with the Western Heritage Association for his original song on the CD “A Nickel A Head”, a song written about the suspension bridge in Waco that was built over the mean Brazos River to get the longhorns across.  They charged a nickel a head and paid for the bridge in two years. The original toll road in Texas!

K.R. Wood a.k.a. Camp Cookie, has been travelling the great state of Texas bringing its history to life through songs and tales for almost 20 years. K.R. was nominated for Texas Musician of the Year in 2009 and 2011 with the TCA (Texas Commission for the Arts).  He is a member of the American Chuck Wagon Association, has been recognized by the 75th Texas Legislature in 1997 for keeping Texas History alive with his first CD “Fathers of Texas” which tells the story of the Texas Revolution, was adopted by the Davy Crockett Family for keeping Davy’s spirit alive in his “Crockett Chronicles” CD, and also adopted by the Texas Alabama Settlement Group, and his Fathers of Texas album was adopted by the State of Texas approved Texas history curriculum through Harcourt Publishing. On April 20th, 2011, K.R.’s Fathers of Texas Music Series and the documentary Fathers of Texas: 175 Years of Texas Independence was recognized by both the House of Representatives and the Senate with a resolution commemorating his work in keeping Texas History alive. On September 5, 2013 K.R. had the distinct honor of being inducted as an honorary member of the Sons of the Republic of Texas with the San Jacinto Chapter and also inducted as an honorary Admiral in the Texas Navy Tom Toby Squadron.

K.R. brings history to life through his performances and his authentic Chuck Wagon in Texas schools.   His unique historical and hysterical performances by Camp Cookie’s Solo, Duo, or Trio encourage children to sing & dance along while learning the wonderful history of the Lone Star State! Stories of Texas are told through song and narration, from the events of the Texas Revolution to the cowboy’s life on the cattle trails. Stories are incorporated that tell of our Tejano and African American heroes and the ‘Fathers of Texas’ such as Davy Crockett, Stephen F. Austin, William B. Travis, just to name a few, as well as the contributions of the women and children. Through these stories, the focus is on instilling good values in our youth and teaching them of the sacrifices that helped make Texas what it is today. He was honored to be a part of the Education in Action Historical Educational Program for 10 years.

Through music, stories and song, K.R.’s passion for Texas history and traditional country music continues to contribute to our great Texas heritage.