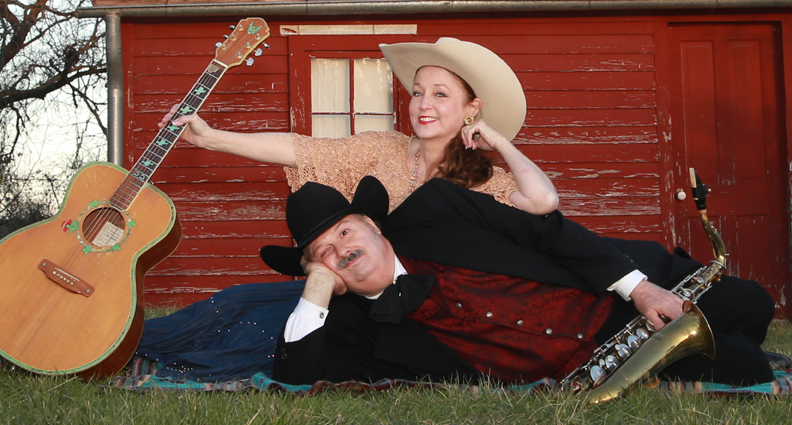 From Fort Worth, Texas, two-time recipients of the International Western Music Association ‘Duo/Group of the Year’ (2013 & 2014), recognized with the 2013 New Horizon Wrangler Award, five-time winners of the IWMA Harmony Duo competition, 2020 Academy of Western Artists duo group nominees, and creators of a stunning new CD, “Plains, Trains, and AlsoBobWills" a 2019 IWMA album of the year, Miss Devon & the Outlaw could be stirrin' up the most dust between here and the chuckwagon camp!

Miss Devon, the 2020 Academy of Western Artists ‘Western Music Female Performer of the Year’ is noted for her vintage 'sock-rhythm' guitar style, warm 'swingtime cowgirl' vocals, and lively persona, engaging kids and adults in her audience with a style perfectly suited to her ‘secret’ persona as the singing voice of Toy Story 2’s “Jessie” on the Grammy-winning Disney cd “Woody's Roundup featuring Riders in the Sky'. She has made appearances at Pixar Studios, the renowned Grand Old Opry in Nashville, done shows with Radio Disney, Riders In the Sky, Michael Martin Murphy, The Texas Playboys, and has popped up on Starz-Encore's "Western Channel", RFD-TV, and American Idol 2018. She is a 2019 inductee into the Sacramento Western Swing Society Hall of Fame.

When Outlaw Jessie Del joins Miss Devon on the stage, things get more fun than puttin' socks on a rooster. According to witnesses, this western gent is the duo’s rowdier half, getting his nickname,as Miss Devon says,"Because it's plumb illegal what he does with Milk Cow Blues!" Like all outlaws, Jessie has been known to disappear into at least a dozen alias personalities, including his obscure acting role as the bartender, Jessie Banks, on Bob Terry’s original western webseries, SUNDOWN (the western webisode series, seen at www.sundownwestern.com), so watch him close! With fine classic western tenor-to baritone vocals, and a LOT of charm, this rascal just might make a clean getaway with yer funny bone.