The Girls of the Golden West 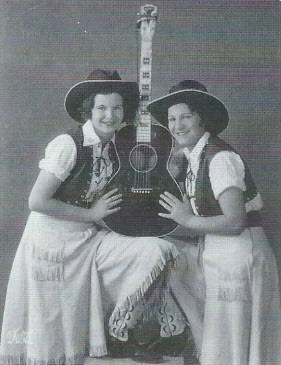 The Girls of the Golden West (Millie & Dolly Good) were very successful/popular Western artists, especially on radio, from the 1930s to the 1960s, largely in the mid-west but with national recognition. They started in Texas on border radio, but in 1933, moved to the WLS National Barndance in Chicago where they were a big hit, especially with their “twin” yodeling and renditions of old cowboy songs in two-part harmony. WLS was a clear channel station, serving millions of listeners throughout the Mid-West, so The Girls had a large fan base. Gene Autry, Patsy Montana, Red Foley and later, Rex Allen became nationally prominent, thanks, in large part, to the extensive reach of WLS. As is often the case in the entertainment business, a certain amount of hype accompanied them in their career. For example, while they decided to use Good as their last name, their real family name was Goad. And because they first gained popularity in Texas, and their attire and repertoire were Western, the publicity people at WLS declared that they were from Muleshoe, Texas. Actually, they were from Carmel, Illinois. The Girls of the Golden West began recording for Victor’s Bluebird label in 1933, and some of their earliest recordings were covers of songs introduced by their colleague at WLS, Gene Autry, e.g. “That Silver Haired Daddy of Mine” was recorded on their first session, and Smiley Burnette’s composition, “Roundup in Cheyenne” was recorded a few years later. When Autry’s record came out, he sang “Silver Haired Daddy…” every chance he got, and he sold a million records, so it was natural for The Girls to record their version early-on, to the delight of their fans. In 1937, they moved to WLW in Cincinnati, then to the hugely popular Renfro Valley Barn Dance and later to the Boone County Jamboree and the Midwestern Hayride. After limiting their work in the 50s, in 1963 they recorded six LPs for the Blue Bonnet label, but the revival of their career was cut short by the premature death of one of the sisters. The British Archive of Country Music has issued three CDs of their recordings. In 1981, the Old Homestead label issued an LP of their music and the Bronco Buster label has issued several of their recordings on anthologies.