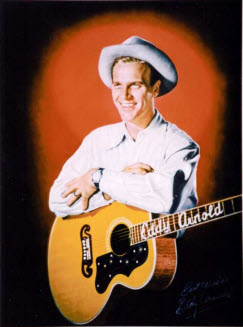 Eddy Arnold was the best-selling country artist during the late 1940s and early 1950s, outselling the entire pop division of RCA in 1948. During his radio and TV shows and in his concert appearances, “Cattle Call” was prominently featured.

The song was written by Tex Owens, who recorded the original version but Fred Rose re-wrote the song— uncredited—which made it more commercial.

Young Eddy Arnold’s hero was Gene Autry; he remembered walking to town to watch Autry in the 12-part serial, Phantom Empire. Arnold sang songs by Autry when he was in his first group, led by Bill Westbrooks. When Arnold joined Pee Wee King’s Golden West Cowboys in 1940 he often sang Sons of the Pioneers songs with Pee Wee King, Milton Estes and Curley Rhodes. Later, Arnold was thrilled to meet the Autry when they were both on a train traveling to Chicago and they became lifelong friends.

In August, 1964 Arnold released an album, Cattle Call,that featured only western songs. Songs on that album included the title track, Bob Nolan’s “Cool Water” and “Tumbling Tumbleweeds,” the Stan Jones classic “Cowpoke,” “Old Faithful,” “Sierra Sue,” Carry Me Back to the Lone Prairie” and “The Streets of Laredo.” Eddy Arnold is one of the top selling acts in the history of country music. His influences go deep into western music with the songs of Gene Autry and the Sons of the Pioneers and he appeared in two western films, Feudin’ Rhythm and Hoedown. But Eddy Arnold never really liked Hollywood; he preferred to sing and sing he did, selling millions of records during his career.

Eddy Arnold had a remarkable career that began with a western song, “Cattle Call” and, when his career ended, that was the song that came to mind when people remembered Eddy Arnold.