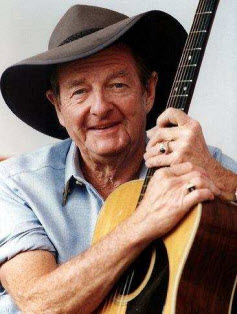 Slim Dusty is widely known as Australia's King of Country Music, but he is also that country's premier purveyor of its "Western" music, i.e. an Australian genre called Bush Ballads, which encompasses any subject matter concerning rural Australia. Slim composed and recorded a huge number of songs about Australia's outback and life in that part of the country. Specifically, he recorded 12 or more cowboy/drover/stockman albums and included 2 or 3 "Western" songs on most of the other 94 albums he made. The "Western" terms used in Australia that might find equivalents in the American West include Stockmen (ranchers), Outback (the range), Bush (prairie), Drover (cowboy), Brumbies (wild horses), Scrubbers (stray cattle), Station (ranch), Boundary Rider (fence rider), Jackaroo or Jillaroo (trainee cowboy or cowgirl) and there's a long list of others you'll hear in Australian songs that illustrate the similarities between the American West and rural Australia. The son of David “Noisy Dan” Kirkpatrick, a cattle rancher in New South Wales, Slim Dusty was able to call on his early life experiences when composing his songs about the bush, cattle and drovers, even though, at an early age, he began a life-long career in music. As a singer, he and his entourage travelled thousands of miles every year, performing in the most remote regions and country towns, mingling with the local residents, learning about their lives, their issues and the characters who lived there. This rich mixture of culture and characters is reflected in Slim’s songs, and his way of life was vividly illustrated in the full-length feature film, The Slim Dusty Movie, which included some live footage of his shows. Slim Dusty was the first Australian to receive a Gold Record, and over the course of his career, he recorded more gold and platinum albums than any other Australian artist. He was also the first artist in the world to record 100 albums for the same label and he was one of the first inductees in the Roll of Renown, Australia's Country Music Hall of Fame. The Royal Australian Mint issued a commemorative Slim Dusty coin and his image appeared on an Australian postage stamp. At the time of his death in 2003, he had written, co-written and/or recorded approximately 100 songs about the Australian bush, stockmen, rodeos and stations, including “Cattlemen From The High Plains,” “When The Scrubbers Break,” “Sat’Day In The Saddle,” "Plains of Peppimenarti," "How a Cowboy Dies," "Old Time Drover's Lament," "Shearing Shed Blues," "The Saddle is His Home," "Just an Old Cattle Dog," "Things are Not the Same on the Land," "Campfire Yarn," "Bushland Boogie," "When the Sun Goes Down Outback," "Mareeba's Rodeo Song," "Happy Drover" and “A Word To Texas Jack,” an amusing tongue-incheek challenge to a Texan who told him everything was bigger in Texas. Slim Dusty was, without a doubt, Australia's greatest contribution to Western music.