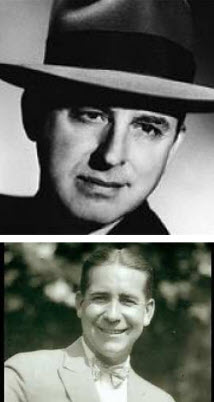 In the 1920’s and 30’s, Johnny Marvin was one of the most important figures in Gene Autry’s career. With his brother Frankie, Johnny befriended young Gene and shepherded him through the maze of New York’s recording studios in the dead of winter in 1927. The Marvin brothers were established in show business and had the contacts that helped Gene launch his recording career. Eventually, they followed him to Hollywood, where Frankie appeared in most of Gene’s movies and as the steel guitarist on almost all of his recordings. Johnny excelled at songwriting, and, often with Fred Rose, composed a large number of songs for Gene Autry to record and to sing in his movies. Eventually, he moved to Nashville where he and Roy Acuff established the Acuff-Rose music publishing company. There, he continued to compose, focusing on country songs, many of which became classics. He had written some of Gene Autry’s most popular ballads, like “Lonely River,” which he cowrote with Ray Whitley, and he composed numerous Western songs for Autry and others, like “Home in San Antone,” “Under Fiesta Stars,” “There’s a Rainbow on the Rio Colorado,” “Rose of Old Pawnee,” & “I’m a Cowpoke Pokin’ Along.” Johnny Marvin’s Western compositions included “I’m Gonna Roundup My Blues,” “Dust” which became a hit for Gene Autry and was recorded by Roy Rogers, who performed it in his first starring feature Johnny had been a famous vaudeville singer, and he continued to sing into the late 30’s and early 1940’s. Marvin was Gene Autry’s mentor, probably the model for Gene’s later “sound” as Autry’s singing style evolved from that of a Jimmie Rodgers sound-alike to a more mellow one as the 30’s progressed. . Too old for active duty during the war, Marvin died from a heart attack in 1943, at 46 years of age, weakened by dengue fever, contracted while entertaining the troops in the South Pacific. Fred Rose worked closely with his friend Ray Whitley in Hollywood, and while there, made his mark as a composer. film, Under Western Stars, where it was nominated for an Academy Award, “Gone with the West,” “Down Texas Way,” “Listen to the Rhythm of the Range,” “Keep Rollin’, Lazy Longhorns,” “There’ll Never Be Another Pal Like You,” “When the Cactus Blooms Again,” “On the Range” & “Old November Moon.” Marvin also wrote several Western songs with Harry Tobias, e.g. “Swing of the Range,” “Headin’ for the Wide Open Spaces” & “A Song at Sunset,” all recorded by Gene Autry and/or used in his films or on radio, except for “Swing of the Range,” which was sung by Mary Lee in an Autry film. Marvin & Rose co-wrote “Rhythm of the Hoofbeats,” “The Old Trail,” “A Goldmine in Your Heart,” “The Dude Ranch Cowhands,” “As Long as I’ve Got My Horse,” “Panhandle Pete,” “’Neath the Blue Montana Sky,” “Merry-go-Roundup,” “There’s a Little Deserted Town on the Prairie,” “Goodbye Pinto,” “Somewhere on the Lone Prairie (Where the West Begins)” & “Little Pardner,” plus a number of popular ballads for Gene Autry to record &/or sing in his movies, e.g. “I’m Beginning to Care” & “I Just Want You.” Other artists, e.g. Roy Rogers, Jimmy Wakely & Eddie Dean also recorded some of the titles. O