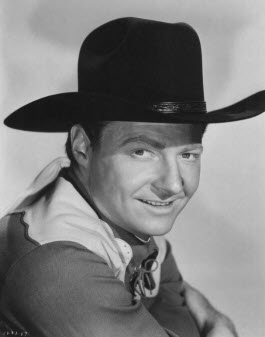 I first met Pat Brady while working on a western. He and two other guys were playing “heavies” and they came busting into town on their horses; they were all pretty good horsemen. One of the other guys was Harry Carey Jr. Both Pat and Harry Carey Jr. would one day become my very close friends.

I have so many great memories with Pat. We became close as we traveled all over the U.S., Canada, the Far East and Europe. The fact that Roy Rogers wanted Pat Brady to replace him in the Sons of the Pioneers speaks well of Pat’s talent as a musician and singer, as well as his comedy.

As far as I know, neither Bob Nolan nor Tim Spencer had written any Western comedy songs until after Pat joined the group, but when they saw his great talent, they began writing some wonderful songs specifically for him, and he performed them so very well! World War II took Lloyd away to serve in Burma and Pat Brady was in the first tank behind General George Patton. He showed me some great pictures that he took of Patton from the turret of his tank. Under heavy fire, that same turret was blown off of Pat’s tank as he served with valor. He wore a scar right up the middle of his forehead for the rest of his life. Pat received citations including the Bronze star and two Purple Hearts while serving in General Patton’s Third Army.

We all remember him, of course, for his comedy. He certainly was a funny guy, but his contributions go way beyond comedy. He had a good voice, and was a stickler for pitch. Fortunately I have been blessed with a good ear for pitch, but when I began with the Sons of the Pioneers I had never sung harmony before and it was Pat who helped me to achieve the skills required to perfect the sound that worked so well with the group. I recall Pat holding his thumb and index finger tightly together and saying; “You’re hearing that note about this much flat.” Since there was no space between his thumb and finger, I was pretty much dead on, but Pat said,”When you hit that note, imagine that you’re standing on a thin piece of paper and it will be perfection.”

Pat was not only an actor and performer, he was also a cowboy. He rode bareback broncs for a while and, like me, he loved the sport of rodeo. He was really proud of my cowboy background, and of me. Sometimes when I was being featured he would come up to the mic and put his arm on my shoulder and say to the audience, “This is my young’un.” Some people took him seriously and I would occasionally be asked, “Aren’t you Pat Brady’s son?” It felt good that he liked me so much; the feeling was mutual. Pat played great bass and had a wonderful repertoire of songs that fit his comedy so well. They included such songs as ‘It’s a lie,’ ‘No Good Son Of A Gun,‘ ‘Don Juan,’ ‘It Had To Be You,’ ‘Biscuit Blues,‘ ‘Bunkhouse Bugle Boy‘ and so many others. It was always fun to perform them with him. It was Dick Goodman (a Western music legend in his own right) and the remarkable, O.J. Sikes, who pointed out to me that the genre is overdue in honoring Pat Brady. Thanks to them and all of you who do so much in this regard, I am grateful. Honoring Pat Brady is a great call. He more than deserves it!