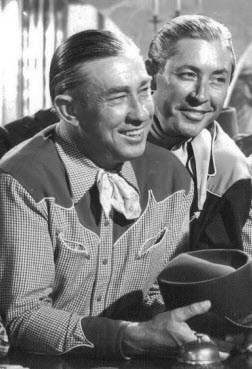 The Farr Brothers set the standard for instrumental accompaniment in Western Music. Not only were they unusually talented soloists, their ability to provide creative intros and instrumental fills behind the vocalists, tastefully without overshadowing the singers, highlighted the importance of their instruments for the music and played a key role in making the Sons of the Pioneers, as a group, the epitome of the genre.

The brothers were born in Texas. Hugh, the fiddler, was the older brother; Karl played guitar. Both were virtuosos but they had very different personalities. Hugh was described by contemporaries as cantankerous and egotistical while Karl was much easier to get along with. They often played pranks on other Pioneers and stories about disruptions on movie sets due to personality differences are legendary.

When John Ford was casting his classic film The Searchers, he asked his son-in-law, Ken Curtis, to bring in some friends to provide the music. He was referring to Lloyd Perryman and Tommy Doss of the Sons of the Pioneers, but he specified he didn’t want the Pioneers as a group because he didn’t want Hugh to disrupt the work!

But no one could criticize Hugh’s talent. Columnist Walter Winchell once asked noted conductor Leopold Stokowski whom he considered the greatest natural violinist of the century. Stokowski is said to have replied, “It really must be two musicians: the left hand of Fritz Kreisler and the right hand of that gentleman who plays violin with the Sons of the Pioneers – I can’t recall his name.”

Little brother, Karl, however, had a different reputation. Johnny Western worked with the Sons of the Pioneers, including the Farr Brothers, when he was 17 in the summer of 1952. The trio at that time was Perryman, Doss and Curtis with Shug Fisher playing bass. Karl took a special interest in young Johnny and took him under his wing that summer. Johnny still has fond memories and respect for Karl, both as a wonderful guitarist and as a friend.

When the Pioneer Trio recruited Hugh, very early on (before they had made any records), the thing that convinced Hugh to join was the trio three-part harmony yodeling. Later, Hugh was to add his mellow bass voice to the group when they sang four-part harmony. After making their first recordings in 1934, the group soon realized that they needed a really good guitarist allowing the trio to concentrate on vocal harmonies. Hugh suggested that his brother Karl might be the perfect candidate.

While primarily instrumentalists, with an amazing ability for head arrangements and a long list of compositions to their credit, the Farrs also provided their share of vocal harmony talents, especially with Hugh singing bass. So did Karl, whenever the group expanded vocally so as to use five and sometimes all six voices in a song. On some of the songs the Pioneers sang, especially those by Glenn and Tim Spencer, the verses were passed around to each member of the group, e.g. “The Cherokee Strip” and “I Love the Prairie Country.” And there were some songs where double trios were used, e.g. as on “Song o the Trail” and “Sierra Nevada.”

After Hugh retired in 1958, Karl sang bass on transcriptions and personal appearances but not on commercial recordings. Karl collapsed on stage and during a Sons of the Pioneers concert in Massachusetts in 1961. Hugh retired to Wyoming, joined a local group called The Country Gentlemen and, in 1962, recorded an LP of Western songs with the new group featuring his fiddle and his unique bass voice. Later, he occasionally played his fiddle for friends in informal settings and some of those visits were captured on private tapes. Hugh passed away in 1980.

Their vocal talents played an important role in the “sound” of the Sons of the Pioneers for decades but The Farr Brothers, Hugh and Karl, are most remembered for their “flying fiddle and galloping guitar.”