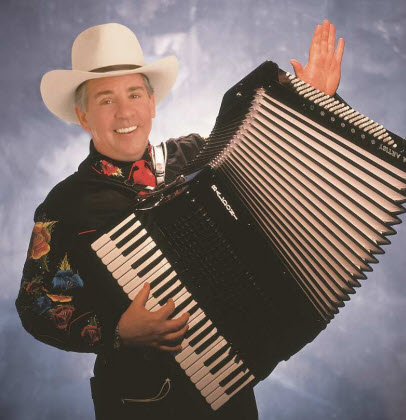 Joey Miskulin, an accordionist and vocalist with Riders In The Sky, is affectionately known as “The CowPolka King.” In homage to his background as the featured accordionist with Frankie Yankovic, “The Polka King,” beginning when he was only 13 years of age. But that appellation only scratches the surface of this multitalented musician who made his first recordings when he was six years old. He has recorded with a long list of notables including Roy Rogers. In addition to the accordion, he also plays bass, banjo, piano, guitar and organ. He also sings, soloing as well as harmonizing with Riders In The Sky when they sing in four-part harmony on stage and on recordings.

His career as a producer has also been remarkably successful, including among his achievements the firstever Grammy Award-winning polka album (1985). He has produced recordings for WMA Hall of Famers Marty Robbins, The Sons of the San Joaquin, Don Edwards, Michael Martin Murphey, Johnny Cash and, of course, a number of Riders In The Sky albums (including their two Grammy winners). These successful, high-profile projects have played an important role in bringing top-quality recordings of Western Music to large audiences in the US and abroad.