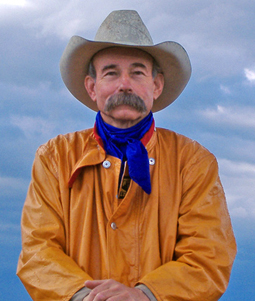 Baxter Black is a cowboy poet, former large animal veterinarian and entertainer of the agricultural masses.  As he puts it, “he has a narrow following, but it’s deep!”  For over 25 years he has traveled the U.S. and Canada, scattering his wit and left-handed observations to folks looking for a bright spot in their day.

When asked how many books he has written, he quotes the late Franklin Delano Roosevelt, “Altogether, too many.”  Over one million books and audios sold, a weekly column, a weekly radio program, a weekly television program …there’s no place to hide if you live in the country!

He has poked his head above the horizon long enough to attract urban followers (gentiles, he calls them), through National Public Radio, public television, Johnny Carson’s Tonight Show, Random House and USA Today.

Baxter says his life has been blessed, “I like what I do.  I have a great home to come home to, a couple good horses, a few cows, a good dog, and friends everywhere I go.  I’m square with God and I make a living entertaining people I care about.

“My audience is my inspiration,” he says, “Every cowboy, rancher, vet, farmer, feed salesman, ag teacher, cowman and rodeo hand has a story to tell, and they tell it to me.  I Baxterize it and tell it back to ‘em!  It doesn’t seem fair, does it?”

If you look around, you’re not more than one or two degrees of separation from his omni-cowboy presence!  He’s kinda like a good pair of boots, a faithful cowdog, or even the flu.  Try him out, he’s contagious!

You can find him in Benson, Arizona at baxterblack.com.  He’s the real thing.  Because, as he says, “You can’t be what you aren’t!”